The BLues Project 2014 - Black and Blue: The Fight for Freedom

This year, the Blues Project will be focused on the Civil Rights movement.  Though emancipated from slavery after the Civil War, it took African-Americans nearly a century to claim their full legal rights as American citizens.  Although small gains were made over that time, it wasn't until the late 1950s and 1960s that the Civil Rights Movement really gained steam, thanks in large part to the leadership of Martin Luther King, Jr. During this time, black Americans marched, sat, and protested for their equal rights in a non-violent social revolution. Since they did not physically fight against the US legal system, the only weapon they had was their voices.  In mass meetings, sit-ins, and marches, singing was always prominent. Music unified the activists, strengthened their resolve, and reminded them of the mission ahead.  While getting black and blue from violent beatings, attack dogs, fire hoses, and billy clubs, these civil rights activists sang in the face of their oppressors the songs of their ancestors, reworked and re-purposed for their current fight.   This year's Blues Project will highlight those songs, as well as other popular music of the time that reflected the struggle and fight for civil rights.  This music is the soundtrack to the civil rights movement. 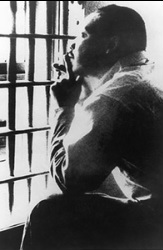 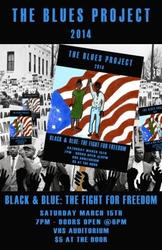 The Blues Project this year will be focused on the music of the Civil Rights movement.   Below you'll find some of the topics we'll cover and the songs we'll listen to.